So, where are they now? We caught up with some of the past subjects we featured in the Modern Perspective and share their updates in this issue of Augusta Family magazine.

Jack continues his education at Georgia Tech majoring in Business Administration, with a minor in Linguistics and a minor in Spanish. He started an internship in June with Buckhead Church doing live production. Jack says, “The internship incorporates the audio, video, and lighting aspects of worship. It’s an incredible experience and I’m able to explore some of the interests I found in photography.”

Best known as “Hollywood GenGen or Augusta’s Teen Madea”, Genesis is a full-time college student while managing and promoting his career as an actor and comedian. Genesis caught the attention of Steve Harvey and actor Cocoa Brown, and he recently worked on Tyler Perry’s newest Netflix movie. He continues to raise his social media influence with 868K followers and engagements following his hashtags have reached 62.2M views.

Tyson had a good year at USCB. He qualified as a freshman for his indoor and outdoor conference meets and received several scholarships. He also ended the year with a GPA of 3.0.  Tyson explained, “It was challenging trying to balance track and my academics. I will be transferring to Alabama State University in the fall continuing with track and my degree in Biology.”

Sky will be attending the University of Georgia this fall where she will major in Psychology and minor in Dance. She is also returning to Colton Ballet to participate in the Nutcracker since her senior year performance was cancelled. Sky is thrilled to see what the next four years have in store for her professionally and personally.

Noah spent time last year painting and trying new techniques and building a new line of notecards that will be released in the coming months. He is excited to share that he was in a documentary called 6000 waiting, and featured in a new book series called “Adventures in Noahland.” “Different But the Same”  is the first book released. Noah will host his first art exhibition at the Gertrude Herbert Institute on September 10, 2021, 5-7pm.

Saira has continued to expand her knowledge in the music field. She met with local music enthusiasts and entrepreneurs at a recent convention, and she discussed music programs and how music plays a part in everyday life today. She is looking at a few different colleges she could attend that will help further her goals. 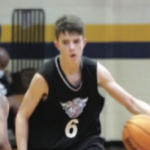 Camden was invited to play with an Under Armour 15-year-old travel basketball team from Atlanta. He played against top competitors from all over the country including Atlanta, Tennessee, Indiana and Texas. He was recognized for his performance and ranked 7th in Georgia for his age group and position. Camden continues to train and work on his game in preparation to play at the college level.

Khaleel has been busy playing travel baseball since the Modern Perspective interview. This summer he played with Complete Game and traveled to LakePoint Sports Complex. Although he struggled a little over the plate at the start, he finished by hitting his second career homerun in the last tournament.

Since the Modern Perspective interview, Isaiah participated in and
won two Coerver 5v5 tournaments. He is also signed up for an ID camp, a
high school/college soccer program, and he has two more Coerver Kid
sessions left in the season.