Grief is an emotion that affects every fiber of our being. It seems the only positive facet of grief is the spirit’s remarkable emergence through the wallowed depths of despair when affected by this overwhelming, all-encompassing emotion. Local farmer, Joseph Doyle found himself afflicted by grief after the loss of his wife, Luella, and was unsure of how to cope and deal with the challenges he faced as a widower. Doyle learned to combat the range and rage of grief and sought refuge in mother nature and his first love: toiling the land and farming the soil.

Born and raised on a family farm in Waynesboro, GA, Doyle had the love of the land ingrained in him from as early as he can remember. Although he has been active on the farm and in business pursuits all of his life, he seriously entered the business arena when he was 24 years old. After entering a partnership to open a janitorial business, Doyle was left making his first important business decision when his partner up and quit their new endeavor. Doyle was at a crossroads and could either close that new business or quit his steady job as a plant worker at J&J Med South. Doyle chose to quit his job as a plant worker and pursued his janitorial business which he currently still owns and operates today. Doyle proudly says it’s a decision he doesn’t regret and although the choice was hard then, it has made him stronger.

After being born and raised on a farm, it seems fitting that after getting married to a woman he met after telling a friend he wanted “a good woman to raise a family with” that Doyle and his beloved would purchase land and pour their all into something they found boy joy and a career in. In 1994, the Doyle’s purchased six acres of land and started growing everything from sweet potatoes, corn, turnip greens, collard greens, squash, peas, cucumbers, pecans and rutabagas. Doyle supplied produce locally while also selling at his privately owned market, Ever Green Produce.

However, in 2010, Doyle lost his wife and with that his passion and desire left as well. Doyle closed his market and took some time to grieve. Slowly with the help of his three children, Jermecca, Antrone and Joseph Doyle, Jr., the love of farming helped restore balance to the grieving family.

While processing his grief, Doyle once again found many benefits to gardening, not least a calm acceptance of the life and death cycle that all living things experience. Gardening was no cure for the loss, it will always be with him, but gardening became a way of carrying on and experiencing the best of the world.

Doyle was able to reclaim his life and passion and found delight in growing sweet potatoes. As an ode to the way farming helped shape and change his life, Doyle freeze dried his first sweet potato and now keeps it in his den as a decorative reminder of where he was then and where he is now.

Out of grief, a local farmer’s love affair with the land was heightened as he poured himself into working long days and nights hoping to rid himself of what once was. Doyle melancholy reminisces that the loss of his wife, “affected him in every way possible.” Today, that loss is something he can cope with as he loves to watch his efforts grow bountifully and takes pride in producing crops, especially sweet potatoes. High in potassium and nutrient dense, Doyle emphasizes that everyone is impressed with his sweet potatoes, noting their unusual size and unique shapes. However, he is not keen on sharing his farming secrets. Doyle currently makes all natural molds out of the unique shapes of his sweet potatoes including kitchen canisters, piggy banks, teddy bears and Tupperware. Using the crops as a means of pulling himself out of grief, Doyle has become dutifully attached to his vegetables and refers to them affectionately as his “babies.” He chuckles when he remembers calling his godmother one morning at 5:00 a.m. to name three sweet potatoes. They lovingly coined the names Pooley who is 1 foot tall and weighs 6.5 pounds, Dooley who is 4.5 pounds and the baby of the bunch, Looley who is 3.5 pounds.

Doyle uses surplus produce as a means of giving back to the community, offering seniors a means of fresh wholesome fruits and vegetables. He also gives his items to the Salvation Army and Golden Harvest Food Bank. Doyle’s facial expression lights up when he remembers these moments of giving, which he says makes his job worthwhile. Doyle’s dream is to mentor inner city youth to provide them with the opportunity to meaningfully connect with nature and the benefits of both good food and hard work. He also plans to work alongside church members to donate to members of his faith and other local charities who have a need for the items he grows.

Doyle reiterates the benefits of hard work and says “Don’t do something for the money, do it because you love it.” He explains that when he began farming he didn’t do it for the money, he did it because he loved it and due to his sincerity and pursuit of that passion, Doyle was able to cope with grief and make a sustainable business out of it as well. Some of his proudest moments have been a result of hard work. Doyle beams when he remembers buying his mother her first new home and says helping to support her has been one of his proudest moments.

In addition to selling his produce, Doyle also makes art out of his pictures by carefully arranging his produce to represent different scenes before photographing and framing them. A creative genius as well, Doyle has crafted an array of t-shirts which anyone who has a love of the land and sweet potatoes will appreciate wearing. Connect with Joseph Doyle at jjdoyle21@gmail.com.

This article appears in the May/June 2017 issue of Augusta Family Magazine.
Did you like what you read here? 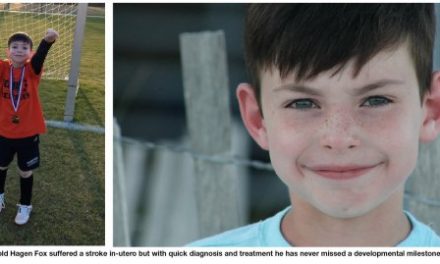 Teacher of the Year Finds Formula for Student Success

Tips for Parents on Getting Through the Covid-19 Crisis