I Cook; Therefore I am…

With apologies to René Descartes and Karin Calloway, I am celebrating my newfound culinary prestidigitation. For years my idea of a home cooked meal was going through the drive through at Chick-fil-A, so being excited  about the art of cooking is as new  to me as tax cuts are to Democrats.

This new hobby was sparked by joining one of those new home food delivery services that seem to be springing up like mushrooms in my front yard. Many are familiar with the concept. You pick from a variety of meals and miraculously every Wednesday a box appears with just the right ingredients for three meals for two.

What makes this especially idiot-proof is that the ingredients are in just the right amounts and just the right packaging as to not confuse the gastronomically challenged. It’s like what you did in kindergarten with Legos and such. In fact, I suspect the company tests the packages on 5-year-olds to make sure things are not too complicated. They realize their target audience is generally people who think a garnish is greenery you put on your mantle at Christmastime and lemon zest is a soap.

I have wondered about some of the company’s names. Everything from Blue Apron to Plated to Hello Fresh and beyond. The apron part is rather obvious, although I don’t wear an apron when I cook. I made the mistake of Googling images of aprons the other day and realized some cooks are as strange as cat ladies. There were aprons depicting everything from a naked, fat matron to a guy with a six pack and Speedo. And cats…lots of cats.

Each week we get three meals with the ingredients labeled like kid’s Garanimals along with easy-to-follow instructions. This is real cooking as you cut things up, mix things together and heat, boil and fricassee stuff. And to think a month ago I thought fricassee was a French curse word. The instructions are very basic, again I believe targeting the preschool population, but they make it close to impossible to mess up. They also include a delightful little essay on some aspect of cooking or a witty anecdote about lentils or chard.

I have started taking pictures of the finished products and texting them to my kids. It is a subtle way of showing them how much fun their mom and I are having now that they are out of the house. There is something deliciously satisfying in sending your kids a picture of pepper-rubbed steaks in Kimchi salad knowing that they are steaming ramen noodles for the second time that week.

The biggest surprise was how reasonable the cost is for two to eat healthy, varied meals. It tells me the markup at grocery stores is similar to what the government pays for toilets. Companies buy fresh produce and meats in bulk, pay for shipping and still deliver the goods for under $10 a meal. I suspect that those who really know how to buy and cook on their own can beat this per-meal deal, but for us flunky foodies, it remains a good deal. I can’t get a hot meal at the Burger Wasteland for under $12 and the hospital costs related to elevated blood pressure and diabetes as a result will add up to even more.

I love the fact that someone saw a problem and came up with a solution. Some bright entrepreneur realized that a gazillion baby boomers were finally empty nesting and were tired of either going out or heating up another boil-in-a-bag meatloaf dinner. It fits our lifestyle perfectly, as we can still eat out occasionally but now can enjoy a night in together making goo-goo eyes at each other as we parse the celery and mince the garlic. There is nothing more romantic than an empty house, a wife dicing onions and meat on the grill.

My wife loves the arrangement because I do most of the cooking now as I really enjoy it. Whenever I get out the cutting board and measuring cups, I harken back to my days in chemistry lab and bathe in the glory of exothermic equations gone by. I love the precision, the smells, the order and the wine that goes into preparing a culinary masterpiece.

Always the health nut, I study the calorie content and makeup of each meal. Some companies make it easy and actually provide you with the data in your package. Others allow you to select from vegetarian, gluten-free, omnivore and even low-carb dinners.

As soon as I finish this next meal I’m going to get one of those naughty aprons and throw caution and good taste to the wind.

This article appears in the March 2016 issue of Augusta Family Magazine.
Did you like what you read here?

An Ounce of Prevention 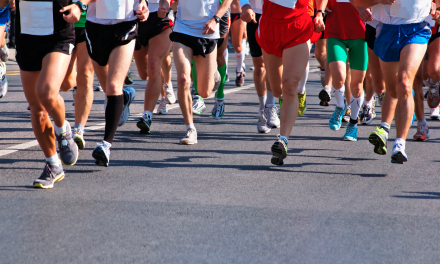 Tips for Parents on Getting Through the Covid-19 Crisis